How Do I Pick the Best Running Shoes for Me?

Before deciding how to pick the best running shoes, it is important to dispel a few myths regarding running shoes and what their role is.

Research suggests that running related injuries have not decreased over the past 40 years despite the constant ‘advancement’ in research and shoe development.

There is a widespread belief that foot pronation and differences in leg length are major causes of knee, ankle & back pain. It is rare that a day goes by without a patient mentioning one of these factors as the potential cause for their current injury.

Conventional wisdom suggests that over-pronation is one of the major drivers of injury, especially in runners. When the published literature is analysed, any such link between foot posture & leg length varation with injury is shown to be less clear cut.

The most common issue that I hear patients bring up in the clinic is that they have been told that they have a flat foot (pronation) and therefore they have been provided with orthotics to ‘correct’ this. Let’s firstly address the issue of foot pronation and injury risk.

Shoe inserts and orthotics have been used for decades to prevent injuries in runner’s. Even though there was no research to substantiate the claim, foot pronation was considered one of the major variables in injury rates in the early scientific literature. It therefore was considered to be one of the major considerations in shoe design as a means of decreasing injury rates.

The main risk factor for having a running-related injury is having had a previous injury in the last 12 months. 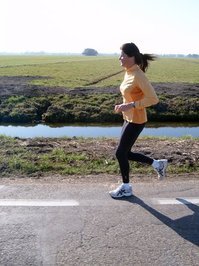 The commonly held belief that excessive foot pronation is associated with an increased risk of injury is not backed up by the scientific literature. Therefore, this brings into question the benefit of anti-pronation shoes and the use of orthotics to prevent injury in runners.

Conclusions: The results of the present study contradict the widespread belief that moderate foot pronation is associated with an increased risk of injury among novice runners taking up running in a neutral running shoe. More work is needed to ascertain if highly pronated feet face a higher risk of injury than neutral feet.

The authors of this study report that changes in the actual plane of motion of the foot were small & not systematic. Changes occurred primarily in the range of movement but not in the path of movement.

The authors propose that an athlete should select a running shoe using their own comfort filter. This automatically reduces the injury risk.

In other words: if it feels good to you then you may have a decreased injury rate by wearing it

Are orthotics good for Shin splints?

The theory is that decreasing foot pronation should reduce the traction of the muscles where they insert into the shin bone. However, the evidence for orthotics in reducing shin splints is inconclusive at present.

Interestingly, Newman et al. (2013) reported that prior orthotic use is a highly significant risk factor for the development of shin splints.

The authors reported that orthotic use is a risk factor for shin splints and therefore they are NOT USEFUL for preventing shin splints.

The authors reported that the runners that had a history of shin pain demonstrated significantly greater pelvic tilt, hip internal rotation and less knee flexion than the pain-free group. The authors suggest that increased pelvic tilt can create valgus moment due to the body’s center of mass shifting medially.

to read more about the conditions we treat go to: https://www.physioclinic.ie/conditions/