Should I worry about “abnormalities” found on my MRI scan?

Should I have an MRI scan to help diagnose my lower back pain?

In the majority of cases of low back pain, MRI scans, and especially x-rays, are not helpful in treating low back pain. Most people are under the false impression that an MRI scan will identify the cause of their pain. The general comment that I hear from patients is: “if I can just get a scan done then I can figure out what is wrong and get it fixed.” However, in reality, a scan shows a lot of structures with varying degrees of abnormalities that are present both in those with and without back pain. This is the reason that medical guidelines are very consistent in stating that imaging for low back pain does not improve one’s pain, function, or quality of life.

About 55 percent of individuals with no back pain will have a disc bulge when an MRI of their back is performed.

Do I need an MRI to diagnose a disc bulge in my low back?

Many people believe that once they have been diagnosed with a disc bulge they need an MRI to confirm it and to assess the extent of the damage. The issue with this is that once a diagnosis of a disc bulge has been made clinically then an MRI scan will not change the diagnosis or physiotherapy management of that condition. I will often get calls from patients saying that they are holding off physiotherapy treatment until they have the results of their MRI; however, the scan generally has no influence on the treatment provided for their lower back pain. Patients are often not very receptive when it comes to being persuaded of the lack of utility of MRI scans in the management of their back pain. This is where a GP, physiotherapist, or chiropractor can agree to refer for a scan even though they know it is unlikely to be of any real benefit. 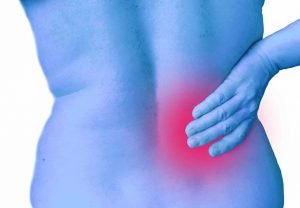 Healthcare practitioners such as physiotherapists and chiropractors are becoming more aware of the limitations of scans in aiding back pain recovery. However, convincing a client that they do not need a scan can prove challenging. I know from having injuries myself that you are naturally curious and there is a part of you that wants to see the area and identify ‘what is wrong’, even if the research suggests it is not beneficial. Despite medical advice to limit such imaging, research published in the British Journal of Sports Medicine in 2019 shows that MRI’s and other scans for lower back pain have increase by 53.5 percent between 1995 and 2015.

Worryingly, more recent findings in the literature have identified negative effects of having back scans. Research shows that those who undergo MRI scans can actually end up with more back pain. This is because after the MRI is performed a report of the findings will be written up by a radiographer. The report will often contain findings of areas where there is bony growth or discs bulging to varying degrees. The problem is that because such findings are present for most people and can therefore be deemed normal. However, the fact that they have been written onto a medical report suggests to the patient and physician that they are abnormal and therefore are a serious issue that should be a cause for concern. This is why MRIs can frequently lead to unnecessary surgeries and can fail to alleviate symptoms as they may not target the source of the symptoms.

If considering a spinal x-ray, it is important to be mindful of the radiation exposure from such imaging. X-rays are recognised as causing cancer in humans. The average radiation from a spinal x-ray is 75 times greater than that of a chest x-ray.

Are my MRI findings really abnormal?

Unlike other medical reports which primarily focus on abnormal findings, MRI scans can report deviations from the ideal spine that can be deemed normal. The MRI report refers to deviations relative to the ideal spine of a young person with perfect spinal curves. The problem here is obvious: most people going for MRI scans are not in this age bracket and therefore the supposedly “abnormal” findings are in fact normal for that age group. This fact is key in understanding the confusion that arises when interpreting the results from MRI scans. After the introduction of MRI and CT scans in the 1970s, medics began using the scans to make a diagnosis as opposed to using them to confirm or refute an uncertain diagnosis.

Questions to ask when you have a back scan:

The main questions you should ask your physiotherapist or chiropractor is this:

These elements are difficult to explain based on MRI findings alone. These “abnormalities” reported on scans can create serious concern for patients. Things such as bulging discs have seriously negative connotations for patients and can create a degree of panic, even though these things may not be the cause of their symptoms at all.  This diagnosis can lead to fear avoidance of activity  and exercise which can create more back pain in the medium to long-term.

In most cases, the identification of a serious disc injury or other spinal conditions of concern is more accurately performed by a clinical assessment carried out by a Physiotherapist or Chiropractor who specialises in back pain. They can identify quite readily those relatively rare cases where patients  actually do require onward referral for an MRI scan.

Got to homepage at: https://www.physioclinic.ie