Hip Joint as a Cause of Groin Pain – FAI

Femoroacetabular Impingement (FAI) – Hip Joint as Cause of Groin Pain

Femoroacetabular or hip impingement is where the top of the leg bone (femur) rubs against the socket of the pelvis (acetabulum) causing pain in the hip joint & groin. Femoroacetabular impingement (FAI) is a common cause of groin pain in athletes. FAI can occur due to an altered angulation or depth of the acetabulum (hip socket) or changes in the alignment of the head of the thigh bone (femur). These lesions are referred to as CAM and Pincer lesions respectively. FAI is thought to predispose to premature hip arthritis; however, FAI is recognised as a normal variant and therefore is not always clinically significant. 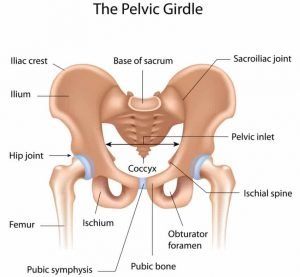 FAI most commonly occurs in athletes & therefore is related to the amount of load the hip joint is exposed to during exercise. Clearly, the direction of force and location of pressure within a joint will dictate where the load is absorbed. Wolf’s law states that bone will grow in direct response to increased load and therefore an individual’s biomechanics (movement pattern) will dictate which part of an athlete’s hip bone will grow in response to training load. When the athlete places their hip into the impingement position this may also irritate the labrum and cause injury to this structure. The progressive irritation of the labrum and surrounding bone will, as loading continues, predispose to the development of arthritis of the hip joint. Lewis et al. (2007) reported that weakness in the gluteal muscles might increase the load in the anterior part of the hip joint (36).

How is Femoroacetabular Impingement (FAI) Diagnosed?

Clinical suspicion of FAI may be present in cases of groin or hip pain in athletes. Physiotherapist examination will assess hip range of motion and, where the clinical picture justifies, referral for imaging of the involved hip may be warranted. An x-ray or MRI scan may show abnormal alignment of the bones of the hip joint and potential tearing of the labrum (hip cartilage). Labral tears commonly refer to the central groin region. However, research has demonstrated that labrum tears up to 3cm may be present without impacting significantly on its function.

Research by Khan et al. (2016) suggests that there has been an exponential rise in the diagnosis & treatment of FAI [1]. It appears that the diagnosis of FAI is in vogue at present and, like most novel diagnosis, it is only after a number of years of treatment that outcomes can be compared with conservative (non-surgical) treatments.

Prior experience with the development of MRI scans and the resulting sudden increase in the diagnosis of disc herniations & knee cartilage damage should act as a point of reference. After several years of research it is now accepted that there was an over-diagnosis of such conditions. This over-diagnosis led to a surge in surgical interventions that may not have been justified in all cases. In fact, a non-surgical rehabilitation approach is now recommended in the majority of disc herniation cases.

Research by Weir et al. (2011) suggests that in athletes with longstanding groin pain, up to 94% may demonstrate radiological signs of FAI [2]. Khan et al. (2016) states that ‘FAI management is early in the innovation cycle’, thus suggesting that management of this condition will be amended in the future and that current research is not conclusive.

Currently, there is no research comparing the effect of conservative (non-surgical) versus surgical management of this condition. The fact that there are a significant proportion of athletes with asymptomatic FAI lesions suggests that physio guided rehabilitation shoulder always be attempted prior to undergoing more invasive procedures.

Statistics from GAA insurance figures show that there were 314 surgeries performed in 2014 compared to 80 in 2007.

Physiotherapist intervention for FAI is based on altering the loading at the involved joint so that friction between the opposing joint surfaces is reduced. This has the potential to alter progression of the symptoms and the morphological changes associated with FAI. Gard et al. (2015) states that conservative treatment should focus ‘on restoring a good muscle balance around the joint and a better lower limb dynamic stability and control’. Physio rehabilitation focuses on

Lewis et al. (2007) reported an increase in anterior hip joint forces when the hip joint extended beyond 10° of ROM36. This force increased when weakness in the gluteal muscles or iliopsoas was present.