Cycling can keep you young

New research suggests that exercise such as cycling can prevent many of the negative consequences of ageing. Ageing has been shown to be accompanied by a decline in immune function, referred to as immunesenescence. This is characterised by an increaesed risk of infection as we age. The study discussed here concluded that cyclists preserved muscle mass and strength while also showing more stable cholesterol and body fat levels. Men also sustained high testosterone levels. Importantly, recent studies have shown that IL‐7 is produced by human skeletal muscle (Haugen et al.,2010), providing a possible explanation for raised levels in the cyclists who did not lose muscle mass with age (Pollock et al., 2015). 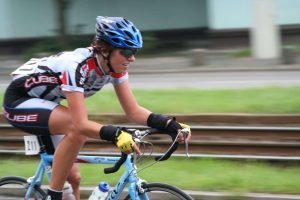 The authors compared the health statistics of 125 amateur cyclists with a comparison group of 75 age-matched older adults and 55 young adults not involved in regular exercise. The male cyclists in the study had to be able to cycle 100km in 6.5 hours while women had to cover 60km in 5.5 hours.

One of the primary immune organs in the body is the thymus gland which sits in the front of the neck. This has been shown to shrink in early adulthood and this process accelerates rapidly after the age of 40 thus causing a reduction in the number of  immune cells produced by the thymus gland called T-cells. Interestingly, the degree of reduction in thymic gland output has been proposed as a determinant of mortality in older adults

The researchers found that the thymus of older cyclists were producing T-cells at a similar quantity to young individuals. Compared with their less active counterparts, the cyclists had significantly higher serum levels of the thymoprotective cytokine IL‐7 and lower IL‐6, which promotes thymic atrophy. The authors concluded that many of the immune impairments witnessed in the elderly may be driven by reduced physical activity rather than being attributed to ageing alone.

“We show here that the effect of maintained high‐level physical activity on T‐cell subset distribution is profound.”

Another feature of human aging is an increase in circulating levels of pro‐inflammatory cytokines (IL‐1β, IL‐6, TNFα,) termed Inflammaging. Research suggests an increased risk of age-related disease and mortality due to this process.

The problem with associating all of these changes to the ageing process is that it does not consider other confounding variables such as the decreased exercise levels in the elderly population. It may be that part of the changes attributed to the ageing process may in fact be a consequence of lifetyle factors such as a lack of exercise and resultant weight gain and cardiac dysfunction. As fat cells are known to store inflammatory chemicals, this may also provide an explanation for an increase in inflammatory markers as we age. Regular physical activity in older adults has been associated with lower levels of pro‐inflammatory cytokines such as IL‐6, TNFα (Gleeson et al., 2011) and increased T‐cell (thymus cell) proliferation (Woods et al., 1999)

“We conclude that maintained physical activity into middle and old age protects against many aspects of immune aging which are in large part lifestyle driven.”