The wrist is a complex joint comprising of eight bones arranged in two rows. These wrist or carpal bones act as a bridge between the forearm and the hand. This architecture allows our hand to be moved in different directions with ease. Any injury to the wrist impairs hand function. 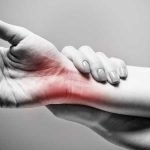 A study published in BMC Public Health in 2013 states that wrist (Carpal) bone fractures and ligament injuries were the top two reasons given by patients seeking emergency care.

Another case study published in the US (AAFP, 2013) points out that fractures, tendon injuries and nerve compressions are the main causes of wrist pain. The study further elaborates that acute wrist pain is usually traumatic like a fracture of the scaphoid (carpal bone at the lower end of radius) bone due to fall on the outstretched hand. Other causes of acute wrist pain include ligament sprains, contusions and instability.

Osteoarthritis (OA) and rheumatoid arthritis (RA) result in chronic wrist pain in the older adults and elderly. OA of the carpometacarpal joint of the thumb is particularly more prevalent.

Carpal tunnel syndrome is a condition where pressure on a nerve (the median nerve), where it passes through the wrist into the hand, causes pain, pins and needles, weakness and numbness in the hand. The median nerve passes through the carpal tunnel formed by the carpal bones and the ligaments that traverse the wrist. This tunnel also houses nine other tendons that pass through it and insert in the fingers. When these soft tissues swell, they compress the nerve resulting in impaired nerve conduction. The carpal tunnel is the most common point of median nerve entrapment in the upper limb.

The patient presents with pins and needles sensation in the thumb, index & ring fingers. In chronic cases, there may be numbness, muscle weakness and reduced grip strength. The symptoms usually occur in the morning but can also occur at night and affect the person’s sleep. Certain activities such as driving, holding a book, or other repetitive activities of the hands (prolonged grasping or flexing the wrist) can also bring on the symptoms. Buttoning a shirt or picking up small objects can be challenging.

Phalen’s test (reproduction of symptoms on bending the wrist at a 90-degree angle for one minute) or Tinel’s sign (electric shock like sensation on tapping the wrist) are diagnostic tests. Carpal tunnel syndrome (CTS) has been identified as work related musculoskeletal disorders in the upper limb (Am J Ind Med. 2010 Mar).

Excess body weight has been found to increase the risk of CTS significantly (Obes Rev, Dec 2015). Also, the severity of CTS has been seen to be greater in the patients with metabolic syndrome (abdominal obesity, dyslipidaemia, hyperglycaemia, and hypertension) than those without this syndrome. These conditions cause an increase in the fibrous tissue within the neural sheath resulting in nerve swelling (J Clin Neurol. 2015 Jul). Increased weight may also be the basis of CTS in pregnant women. The condition is also more often seen in middle aged persons and thrice more in women.

Patient education, night splinting and nerve gliding exercises have proven effective in the management of CTS (Karina J Lewis et al, BMJ Open 2016). A recent study also encourages the use of kinesiology taping for expansion of carpal tunnel space in patients with mild CTS. It has shown to improve the nerve conduction velocities of the median nerve (J Exerc Rehabil, 2017 Jun). Taping can be used as an adjunct to exercise.

Contrary to popular opinion, increased computer exposure does not increase the risk of CTS when compared to workers in other manufacturing units. But impaired upper body posture can inhibit normal median nerve gliding, resulting in pins and needles like sensation (BMJ Open, 2015) in computer workers.

Of all the carpal bones, only the scaphoid and lunate participate in weight bearing through the upper limb. Thus, scaphoid is the commonest carpal to fracture. Interestingly, fracture of the hook of hamate is another routinely occurring injury in golfers.

A scaphoid fracture is particularly hard to diagnose as it is hard to visualise on an X-ray. The mechanism of injury, presenting symptoms (swelling and bony tenderness at the base of thumb), specialised X- ray views or MRI are helpful in diagnosing the injury. Early diagnosis is crucial, as the scaphoid has a sensitive blood supply, rendering parts of it prone to losing its blood supplyavascular in case of a fracture. This can lead to a condition called avascular necrosis where part of the bone dies due to a lack of blood supply.

The fracture is usually treated in a short below elbow fracture cast for 4-6 weeks. Once the cast is off, the physiotherapy sessions are begun. These focus on increasing thumb opposition movement, pronation and supination and wrist movements. After the stretching exercises and joint mobilisation, strengthening exercises to improve grip are encouraged.

The wrist is the most frequently injured body part among professional golfers. The hamate is the last carpal bone on the side of the small finger (ulnar side). The sudden inward flick of the wrist during the strike phase (when the club hits the ball) is the cause of injury. There is tenderness over the inner side of the palm. The golf-induced hamate hook fracture is managed conservatively (non-surgically), with cessation of physical activity in the involved side for eight weeks.

Dequervain’s Tenosynovitis (DQST) is a commonly occurring tendon injury in individuals performing repetitive rotation (pronation and supination) of the forearm, medial and lateral deviation of the wrist, and abduction/extension of the thumb (Journal of Occupational Rehabilitation, 2001 March). There is impaired gliding of two thumb muscles called the abductor pollicis longus (APL) and extensor pollicis brevis (EPB) tendons. These muscles are responsible for the stability, movement and force application of the thumb.

Interestingly, although this is a lesser known condition, it formed the most common cause of hand pain attending Chiropractors in the UK in 2013. There is gradual onset of pain and swelling at the base of the thumb. The Finkelstein test (making a fist with the thumb inside of it and deviating away from the thumb) is positive.

It is believed that biomechanical overloading causes the extensor retinaculum (sheath covering the tendons) to thicken in response to cumulative strain. It has been postulated that thickening of the tendon sheath and subsequent narrowing of the canal affects the normal gliding movement (J. Can. Chiropr. Assoc, 2012 Jun). As a result, individuals who use their thumbs in repetitive pinching, wringing, lifting, grasping, or extension activities of the hand become susceptible to progressive stenosis in this part of the wrist.

Thickening of the tendon sheath has been attributed to deposition of mucopolysaccharides, fatty infiltration, formation of new blood vessels and change in the structure of the fibrocartilage (metaplasia). This is similar to the changes seen in other tendinopathies. (Rheumatology, 2013). The mechanical impingement of the tendons results in pain, decreased efficiency during gripping, pulling and pushing activities.

The treatment focusses on eccentric strengthening of the thumb muscles, wrist flexors and extensors and the forearm pronators and supinators with addition of concentric components in the later stages.

Arthritis of the Wrist & Hand

Osteoarthritis (degenerative arthritis) of the thumb is usually seen in writers and those who are typing repetitively for several years. Pain and stiffness in the thumb and poor grip are the presenting symptoms. A functional splint worn while doing daily activities has proven to be effective in reducing pain (J. Rehabil. Med. 2010 May). Also, patients with OA of the thumb benefitted hugely from mobilisation of the carpometacarpal joint and exercises (hand activities to improve pinch grip) (J. Orthop. Sports Phys Ther, 2013 Apr).

Rheumatoid Arthritis (inflammatory arthritis) affects the smaller joints of the hand, generally the knuckles and the joints in the middle of the fingers. Rheumatoid arthritis makes it difficult to perform simple tasks of daily living. The SARAH protocol was developed exclusively for these patients. This protocol has demonstrated that an individually tailored, progressive stretching and strengthening exercises of the hand improved hand function over a 12-month period. It can be used as an adjunct to medical management in these patients (BMJ Open, 2016). These patients also need adaptive devices and assistive devices to improve quality of life in later stages.

or email us at info@physioclinic.ie[/vc_column_text][/vc_column][/vc_row]