What causes knee pain in Runners?

Knee pain is a common complaint amongst runners. The pain associated with runner’s knee involves excessive loading of the surface under the kneecap (patella). The joint underneath the kneecap where it moves over the underlying bone is called the patellofemoral joint.

Pain in this joint arises due to a mechanical overload of the joint. For example, during running the  ground reaction forces can be up to 4.5 times body weight.

A gradual increase in joint pain, cracking with movement, or pain walking up or down a stairs are common symptoms of the condition.

How can I change my running technique to improve my knee pain?

Recent advances in gait analysis have demonstrated that knee joint load can be altered significantly depending on the style of running adopted. Modification of step rate and stride length are two commonly utilised methods for decreasing the symptoms associated with runner’s knee pain. 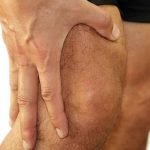 Further research by Lenhart et al. (2014) reported that a 10 percent increase in step rate reduced peak knee (patellofemoral joint) load by 14%.
Although a forward trunk lean may decrease load in the front of the knee these findings must be considered with caution as it may increase stress on the hip joints or joints of the lower back. If you are suffering with knee pain, then you may attempt to lean forward slightly & monitor its impact on your symptoms.

It is very important to consult a Chartered Physiotherapist in order to diagnose the condition accurately & provide rehabilitation specific to your condition.

Does Running Cause Knee Arthritis?

A study published in Arthritis Care & Research called the Osteoarthritis Initiative examined the knees of  2,637 participants.

After eight years, participants were given a physical activity questionnaire. The research team had expected that a higher prevalence of running would be associated with a greater incidence of knee arthritis; however, the results were the exact opposite of their hypothesis.

The authors concluded that: “A history of leisure running is not associated with increased odds of prevalent knee pain, ROA, or SOA [symptoms of arthritis]. In fact, for knee pain, there was a dose-dependent inverse association with runners.”

In other words those that ran the most had the least knee pain. It can be argued that those that stop running due to pain would have a smaller cumulative running mileage & that this might explain the findings; however, it strongly suggests that running is not harmful to knee joints after

That runners are more prone to knee or hip joint arthritis as compared to walkers is a firmly entrenched belief. On the contrary, newly published studies reveal that if you have previously healthy knee joints, nothing can stop you from running well into your old age!

The belief that running was more stressful to the joints than walking was based on the perceived difference in loading of the joints during both activities. Between running and walking, the latter was considered less stressful. It was presumed that repeated impact during each stance phase of the running cycle excessively loaded the joint cartilage leading to arthritis in the long run.

But a recently published, cross sectional study consisting of around 75000 runners disapproves the this theory. It states there is no concrete evidence that running increases the risk of osteoarthritis, including participation in marathons. They actually had a decreased overall risk of developing arthritis than less active individuals.

Is Running Bad For My Knees?

There is increasing evidence for the favourable effects of running on the knee joint. Yet why professional runners can avoid developing significant arthritis of the knees was a puzzle until recently. By most people’s logic, an increase in training will cause the joint to “wear away” much like the sole of your running shoes will wear with time.

Luckily, living tissues respond differently as they require load and become stronger in response to load. A good example is the older person who lifts weights, thereby sustaining their muscle bulk as opposed to their muscles “wearing away” from overuse.

A study released in the Journal of Medicine and Science in Sports and Exercise compared the load applied over the person’s knees during walking and running over a fixed distance – something that had not been done before.

The study involved 14 participants (with healthy knees) who were made to walk and run 5 times over a 50 feet long runway at a comfortable pace. Specialized motion sensor cameras were used to detect the joint loading and unloading during each strike. The results were very interesting.

The participants struck the ground with around eight times their body weight while running, as compared to three times during walking. But they hit the ground less often while running, due to increased stride length. Therefore, they required fewer steps to cover the same distance while running compared with walking. The increased impact during running was also very brief as the foot to ground contact was for a very short time.

On comparing these differences, the researchers concluded “the amount of force moving through a volunteer’s knees over any given distance was equivalent, whether they ran or walked. A runner generated more pounding with each stride, but took fewer strides than a walker, so over the course of, say, a mile, the overall load on the knees was about the same.”

Another 14 year long prospective longitudinal study on people over 50 years endorsed the above findings. This latest study in Arthritis Research & Therapy dispelled the myth that running causes continued trauma to the knee joint over the years increasing the risk of pain and arthritis. They compared a group of runners who ran an average of 26 iles a week with a control group who ran abouttwo miles per week. The study’s major conclusion was that runners experienced “about 25 percent less musculoskeletal pain” than the controls.

Why running is Beneficial for the Knee

Running is definitely good for the joints – a fact backed by the findings of Arthritic Foundation. Running strengthens the muscles and tissues around the knee and hip joints. Stronger balanced tissues provide greater joint protection and offset excessive pressures on the joints. Result – healthy pain free knees.

On the other hand, lack of exercise results in smaller and weaker muscles and poor joint protection; ultimately leading to knee pain.

This has been established clearly in a recent study where runners over the age of 50 years experienced lesser pain as compared to the nonrunners of the same age.

Even the medical community has started to accept the benefits of running. The Chief Public Health Officer of Arthritis Foundation agrees that it is the body weight and not running that affects the knees. Running avoids weight gain which lowers stress on the joints

A landmark study by Paul Williams this year with 89000 subjects showed no correlation between running and arthritis of the lower limb when compared to walkers.

Running More Beneficial than other activities for Knee

When compared to activities like swimming, skiing and soccer; running is the winner. A study done in 1985 found that only 15.5% of cross country runners developed knee pain as against 19.5% swimmers. The incidence of surgery for osteoarthritis was also more in swimmers (2.1%) as against runners (0.8%). Another researcher compared soccer players and weight lifters to runners where the former had 2 times increased occurrence of osteoarthritis. The same was true for skiers too.

Points to consider for Runner’s Knee

Runners can now rejoice as more emerging studies point out that stress encountered while running does not make your joints vulnerable to arthritis. Regular runners are at lower risk for joint pains as compared to nonrunners. Not to forget the benefits on the cardiovascular system. So don’t hang your running shoes up just yet.

But interplay of certain factors like obesity, genetic predisposition and history of joint injuries can make running a risky affair for some people.

Runner’s Knee: How to run the right way

So put your best foot forward and Run!

Pain at the Kneecap (Patellofemoral Joint)

Patients with pain under the kneecap (patellofemoral pain) often report onset of pain while loading the knee in a flexed position. This occurs when running, squatting or walking up stairs.

Some patients with patellofemoral pain can get inflammation of the fluid lining the joint capsule (synovial fluid). In the case of acute synovitis there will be active swelling evident. Patients with synovitis will often have higher irritability and possible morning stiffness.

Patients with damage to the cartilage and underlying bone often have low tolerance of loading. Such patients may progress well through rehabilitation but on returning to sport can tend to flare up again.

If patients are struggling to return to sport then this would suggest a higher suspicion for osteochondral involvement of the joint surface. The kneecap sits into a groove in the thigh bone known as the trochlear groove. Involvement of this structure is associated with worse outcome than involvement of the undersurface of the kneecap (patella).

If most of the knee pain occurs in extension then it is likely that there is fat pad involvement. The fat pad of the knee is a soft tissue structure of fat cells that lies just below & under the kneecap. Because the fat pad has a rich nerve supply it is one of the most pain sensitive structures in the knee.

If this is negative then it is probable that the fat pad is not the source of pain. If diagnosed a heel raise may be used temporarily to decrease pain. Lunges in deeper ranges of flexion may be helpful for this condition

Do flat feet increase the risk of injury from running?

The commonly held belief that increased foot pronation is associated with an increased risk of injury is not backed up by the scientific literature. Therefore, I am not a big advocate of providing orthotics to decrease pronation in runner’s who believe that this is the cause of their pain.

Results: During 1 year of follow-up a total of 252 participants sustained a running-related injury. Compared with a neutral foot posture, no significant differences were found after 250 km of running for highly supinated feet, supinated feet, pronated feet and highly pronated feet. In addition, the incidence-rate revealed that pronators had a significantly lower number of injuries/1000 km of running of than neutrals.

Conclusions: The results of the present study contradict the widespread belief that moderate foot pronation is associated with an increased risk of injury among novice runners taking up running in a neutral running shoe. More work is needed to ascertain if highly pronated feet face a higher risk of injury than neutral feet.

Return to homepage at: https://www.physioclinic.ie