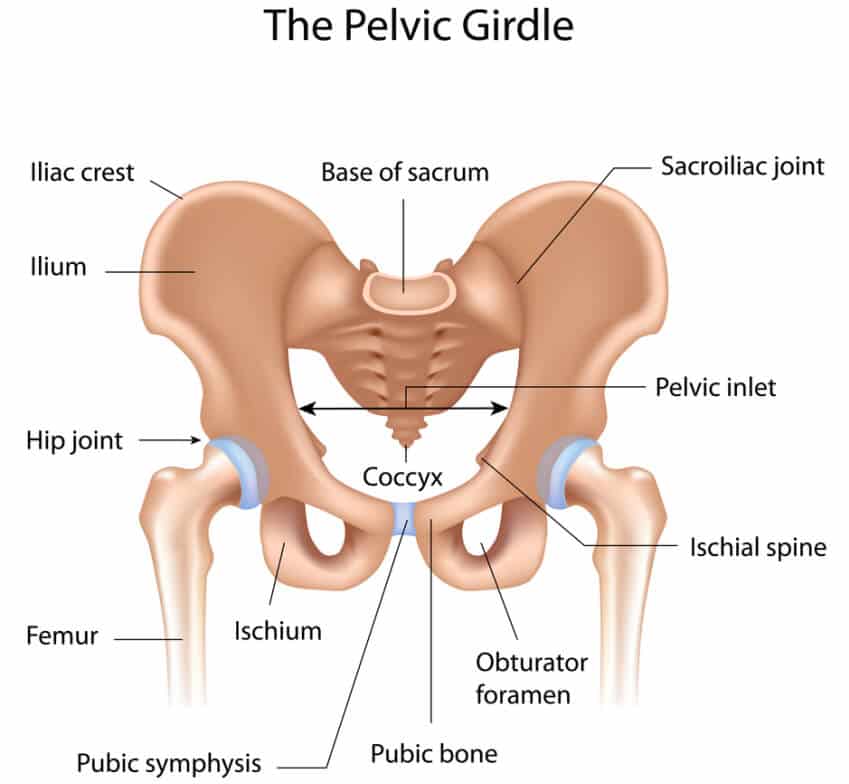 Anatomy of the Pelvis

The pelvis is formed by the articulation of three bones – two ilia (pelvic) bones and the sacrum in the middle. The ilia are winged bones that attach on either side of the sacrum to form the sacroiliac joints. The sacrum forms the base of the spine. In front, the ilia fuse to form the pubic symphysis. The pelvis is an important structure as it connects the spine to the lower body. It acts as an anchor for muscles that help us to walk or lift things.

Pelvis has another vital function. It houses some extremely delicate organs like the bladder, uterus and ovaries in women and bladder and prostate in men. The bony pelvis protects these organs from external injuries.

The bony pelvis is subjected to a lot of forces during every day activities resulting in pelvic pain.

Pelvic pain is a common occurrence, especially in women during pregnancy. Pelvic pain can take different forms, the most common being: pregnancy-related pelvic girdle pain (PPGP) or pubic symphysis dysfunction (PSD). Pelvic pain occurs most commonly during pregnancy due the increased weight-bearing requirements of the pelvis, changes in posture & the release of pregnancy related hormones such as relaxin. Relaxin is a hormone produced by the ovaries that acts to increase the laxity of the ligaments of the pelvis.

The pelvis has a high density of ligaments and these ligaments connect the pubic symphysis at the front of the pelvis & the sacroiliac joints at the back. Growth of the fetus as well as the widening of the pelvis and elongation of pelvic ligaments creates an environment where pelvic pain can develop. Relaxin levels are highest during the first trimester; however, the increased pressure on the spine in the later stages of pregnancy means that, oftentimes, pain becomes apparent at this stage. Pubic symphysis dysfunction (PSD) can give rise to pain that can prevent you from sleeping or even give rise to pain while going to the toilet.

Typically, an individual with SI joint dysfunction will report of pain in the lower part of the spine which may run down to the buttock or back to the thigh or the groin. He will find it difficult to turn in bed. The individual also complains of morning stiffness and pain after prolonged periods of immobility. This condition is often seen in long distance runners.

Treatment includes mobilisation to improve joint mobility and the neuromuscular integrity of the joint & surrounding structures. This can be followed up by gentle stretching of the hip abductors and gluteal muscles. Strengthening of hip and core muscles can also help to increase the stability around the SI joint.

This condition is more often seen in soccer or rugby players as a result of sudden cutting and kicking movements during the game. It may also occur due to overuse in runners who practice uphill running. The athlete complains of groin pain or lower abdominal pain while running or squatting. They may also find it difficult to perform sit ups. As the pain is not localized, diagnosis becomes difficult.

In women, pain in the pubic symphysis is a common complaint during pregnancy as a result of ligament laxity which occurs due to release of the hormone relaxin.

Treatment involves adductor stretching and strengthening and core strengthening. The exercises must progress slowly as this injury takes a considerable time to recover. Avoiding overtraining and increasing core muscle strength can help prevent this condition in susceptible athletes.

Treatment includes graduated lower body strengthening exercises after the fracture has healed completely. This can be followed up by sports specific exercises.

The pelvis is shaped like a ring. Pelvic fractures are graded by severity and the degree of stability of this ring:

Grade A: Stable fracture – These are usually relatively minor fractures of one of the ilia or an avulsion fracture at the attachment of rectus femoris.

Grade B: Rotationally unstable – These occur as a result of compressive forces on the pelvis, resulting in the widening of the SI joint and separation of the pubic symphysis

Grade C: Vertically and rotationally unstable – The pelvic ring is completely disrupted with severe injuries to the internal organs which may be fatal.

Rehabilitation after grade A fracture is begun once the X-rays confirm healing of the fracture site. Initially gradual weight bearing is introduced followed by lower body strengthening using weights and resistance bands. In later stages, running, jumping and other sports specific activities are recommended. Grade B and C injuries need surgical intervention followed by intensive rehabilitation.

Management of pelvic pain may require a combination of soft-tissue methods such as trigger point & myofascial release techniques or acupuncture. Also manipulation or mobilisation techniques can be very effective in relieving symptoms & restoring normal motion to the pelvic region. These will generally be combined with exercises to address specific deficiencies that may predispose to such symptoms.
It is also important to optimise range of motion at the lumbar spine and hips in order to decrease stress on the pelvis. It may also make the delivery process as comfortable as possible.

We are experts in the management of pelvic pain and other forms of back pain. As a trained physiotherapist and an avid football player myself, I understand that pelvic injuries can be very tricky to diagnose and treat as they may have a long recovery period. This can be extremely frustrating for athletes.

Most of the pelvic pain cases require load management via a reduction in sports participation allied to significant rehabilitation exercises.

Once a brief rest period is over, we develop individual rehab programs for every athlete as each one is different. We include a lot of strengthening exercises and sports specific drills, so that the athlete can return to his game as early as possible. We also correct any biomechanical errors in training so as to reduce the chances of recurrence.

At Naas physiotherapy clinic, we use:

For further information on treatment of pelvic pain contact Naas Physio Clinic on:
(045) 874 682