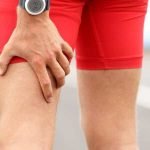 What is a Hamstring Strain?

A hamstring strain is a tear of the muscles of the back of the thigh. The hamstrings are composed of three muscles (semimembranosus, semitendinosus & the biceps femoris) which together form the hamstring muscle group. Most hamstring strains occur in the biceps femoris muscle. On occasion, a complete hamstring tear (avulsion) may occur at the insertion point at the top of the thigh. Hamstring strain injuries have been shown to account for between 12 & 16% of professional football injuries, resulting in 15-21 missed games for each club per season (1, 2). A hamstring tear can vary in intensity from mild (Grade I) and requiring a short period of rest to a more severe (Grade III) hamstring tear which requires significant rehabilitation. A hamstring tear is something I experienced myself as a younger athlete. I recall the frustration of undergoing repeated hamstring tears for which I attended a number of therapists prior to getting back on the road to recovery. Most athletes will suffer from a number of hamstring tears over the course of their careers. Oftentimes, inherent weaknesses in muscle activation patterns & running technique may be predisposing factors in hamstring tears. Only a comprehensive hamstring rehabilitation programme can address these underlying issues & minimize the risk of re-occurrence.

What causes a Hamstring Strain?

Hamstring strain / tears most commonly occur from sprinting where the hamstring is contracting in a stretched position during the late swing phase of the running cycle. The hamstring strain may also be cause injury from rapid changes of direction or long range kicking. The hamstring is particularly predisposed to injury because the muscle is biarticular i.e. it crosses two joints (the hip & knee). This complexity in terms of function means that any biomechanical dysfunction can quickly give rise to hamstring tears. The athlete will often experience a sudden, sharp pain in the back of the leg. This sudden pain is a very strong indicator of a tear. Often, the athlete will attempt to continue in the hope that the pain may go but this is rarely the case & generally this results in a longer period of rehabilitation. Research has suggested that a combination of factors (strength, flexibility, fatigue, warm up) may all increase the risk of hamstring tears (1).

Although, as with any soft tissue injury a short period of rest is vital, we like to get the athlete back on their feet & exercising as soon as possible. The timescale will depend on the grade of the tear; however, immediate application of R.I.C.E, (rest, ice, compression & elevation) can accelerate the healing process significantly. Oftentimes, athletes make the mistake of resting the hamstring injury for a number of weeks and then because they no longer feel any hamstring pain they believe they are ready to go  straight back onto the pitch. This can be a costly error as a graded rehabilitation process is required to build up the strength in the muscle and prepare the hamstring for the stresses it will endure when playing sport. Failure to do this will significantly increase risk of re-injury and a significant time out of your sport as a consequence.

The benefits of a specific rehabilitation approach is made abundantly clear by research performed by Sherry & Best (2004). This study demonstrated that specific agility & stabilization exercises as prescribed by your physiotherapist can significantly decrease hamstring injury re-occurrence when compared with performing standard hamstring stretches. Two weeks after return to sport, 6 of 11 athletes performing the stretching exercises suffered a re-occurrence of hamstring tears compared with none of the athletes in the agility & stabilization group. This suggests that hamstring stretching is a less than optimal means of managing a hamstring tear. This is backed up by a randomized controlled trial by Mechelen et al. (1993) that found no benefit for hamstring stretching in the reduction of hamstring injuries.

The effect of a sports chiropractic manual therapy intervention on the prevention of back pain, hamstring and lower limb injuries in semi-elite Australian Rules footballers: a randomized controlled trial.

‘This study demonstrated a trend towards lower limb injury prevention with a significant reduction in primary lower limb muscle strains and weeks missed due to non-contact knee injuries through the addition of a sports chiropractic intervention to the current best practice management.’