An Avulsion fracture takes place in cases where a small bone fragment is pulled away (avulsed) from a bone. Both ligaments & tendons attach to bones.

If a joint is moved towards the end of its range then the ligament or tendon can pull on the bone and cause a small fragment of bone to tear off. Avulsion fractures are particularly commonplace in certain areas of the body such as the outside of the foot (at the 5th metatarsal bone). A severe hamstring injury may also give rise to an avulsion fracture of the bone where it inserts into the pelvis & requires a lengthy rehabilitation process.

The fracture may be a result of a violent contraction of a muscle, which pulls on the tendon. The pull causes the piece of bone attached to the tendon to break away. A sudden twisting movement at the joint may cause an avulsion fracture which can accompany a ligament sprain such as occurs at the ankle.

Avulsion fractures can be due to an overuse injury as well. Repeated forceful movements over time may cause overloading of a bone and result in a fracture. This is especially prevalent where there is a sudden increase in loading as occurs with dancing or with a recent increase in running mileage. Avulsion injuries are more common in the legs than the arms or spine.

Avulsion fractures are one of the rarer sporting injuries. They are seen more in the adolescent athletes aged between 11-17 years. With increased participation of youths in sports, the number of avulsion injuries has increased. Literature reports these injuries to be more common in boys than girls.

The skeleton of a teenager is quite different from an adult. Because bones are still growing they are not fully fused near the ends of the bones. These open “growth plates” help the bone to grow.

During the growing years these end plates are structurally weak and liable to injury. More so in young athletes participating in sprinting, hurdle racing, football, and tennis etc. These sports involve explosive and repeated actions that put excessive loads on the tendons and their bony attachment.

In young athletes the muscles and tendons are stronger than the surface of the bones where they attach. Thus, when these athletes perform a strong brisk muscle contraction the loads are passed through the tendon to the bone. The tendon can snap taking along a fragment of the bone with it causing an avulsion fracture.

Once these growth plates fuse with the rest of the bone, they are stronger than the muscle/tendon unit attaching to it. Thus, avulsion fractures are less common in adults.

Interestingly the avulsion fractures are more common in the pelvis and hip as these growth plates fuse much later than the rest of the body.

Inflammation of the end of the bone (apophysis) in young players (e.g. Osgood Schlatter’s disease) is often present prior to an avulsion fractures.

What causes an avulsion fracture?

Avulsion fractures at the pelvis & hip: 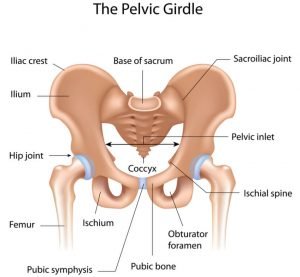 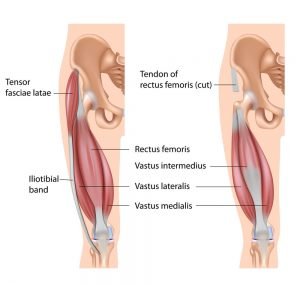 Avulsion fractures of the pelvis & hips are seen in adolescents between the ages of 14 to 17. The injury is associated with sports requiring forceful kicking actions or sprinting.

In the case of rectus femoris or sartorius involvement, there is pain in the groin. Resisted hip flexion elicits muscle weakness. The athlete tries to avoid putting weight on the affected side while walking.

In case of hamstrings involvement, there is pain and tenderness in the buttock, especially on sitting. There is weakness in the hamstring muscle and the athlete finds it difficult to walk or run. Sciatic nerve entrapment is common with the healing of avulsion fractures of the hasmtring insertion at the pelvis. This is usually picked up on an MRI or ultrasound.

Kids playing soccer are more prone to hamstring avulsion injury as compared to quadriceps avulsion injury. The incidence of pubic symphysis avulsion due to rectus abdominis contraction is even rarer.

Avulsion fractures at the knee:

Is the most well known avulsion fracture at the knee. It is the fracture of the upper part of shin bone (tibia) just below the tibial plateaus. The implicating movement is an outward movement of the knee with the leg fixed in internal rotation. This action exerts a pull on the anterolateral ligament of the knee resulting in the avulsion fracture. In over 90% of the cases it is associated with injuries to the anterior cruciate ligament and the medial meniscus. It is also associated with avulsion fracture of the proximal fibula. The fibula is the slender bone present laterally to the shin bone in the leg where the hamstring inserts. Pain and tenderness is usually present on the outer side of the knee alongside a decreased range of motion. The patient might limp while walking.

Ooccurs as a result of strong eccentric contraction of the quadriceps muscle. The tibial tuberosity is the apophysis present in the proximal part of the shin bone (tibia). It is a bony protrusion felt just below the kneecap. The quadriceps tendon inserts on it. When a young athlete, lands after jumping or skiing, he bends his knees to cushion the impact. The abrupt jump landing causes quadriceps to contract eccentrically, creating a tension on its tendon. There is pain, swelling and tenderness below the kneecap. Resisted extension of the knee is painful. The athlete is unable to bear weight on the affected side.

Forced external rotation of the foot or inward rotation of the leg severely stretches this ligament. Since the fracture is near the weight-bearing surface, degenerative arthritis is a major complication. Also, as the growth plate is involved, growth disturbances may occur.

How to diagnose an avulsion fracture?

An avulsion fracture will be considered when a young athlete reports a truamatic injury in the lower limb. The mechanism of injury, an audible pop, localised pain, and tenderness accompanied by swelling should prompt one to suspect an avulsion fracture.

Muscle weakness and difficulty in weight-bearing are other telltale signs.

Usually x-rays are able to pick up avulsion fractures around the pelvis and knee. They will show a small fragment of bone detached from the main bone. For knee or ankle injuries, special views like oblique or axial projections may be needed.

Avulsion fractures are easily confused with an unfused growth plate in adolescents. The growth plate is the part at the end of the bone in adolescents where the bones are not yet fully fused. An image of the other joint helps to differentiate. This may be needed if the fracture is undisplaced.

How are avulsion fractures treated?

Undisplaced fractures are treated by keeping the affected leg immobilised for 2-3 weeks in a plaster cast. If the avulsed segment is displaced by more than 2mm, reduction with screws and nails is the treatment. Return to sports is possible within 6-12 weeks of injury in both cases.

Physiotherapy is extremely important for early weight bearing and return-to-play following avulsion injuries. The initial goal following an avulsion fracture is to minimise pain & swelling. This requires the application of ice, compression & sufficient rest to allow bone healing. If weight-bearing exercise is initiated too early in the process then this can delay healing significantly & will slow any return to activity.

During the immobilisation phase isometric (contractions without moving the joint) exercises are encouraged to maintain muscle strength. Once the cast is removed active range of motion exercises are introduced.

Once the fracture site has healed, then your physio will introduce a graded exercise programme. The first goal will be to restore normal range of motion as soon as possible. Stretching and flexibility exercises help to restore normal range. The next goal is to increase strength; ultimately the goal is to restore strength to pre-injury levels so as to prevent further injury. Progressive resisted exercises for the entire lower limb muscles are incorporated. Gradual progression to full weight-bearing while walking is also started simultaneously.

Balance training on unstable surfaces like the wobble board are also particularly useful. They can be made challenging by narrowing the stance or closing your eyes. Both of these exercises place positive stimulus on the growing nervous system, which improves power and reaction time.

Moderate intensity plyometric (hopping and jumping) drills improve the speed, strength and power of a muscle. They also help to increase tendon & bone density and decrease the risk of future fractures. These should only begin after adequate strength and flexibility is attained in the muscles. Sports specific drills like running and agility training begin on the field in the final stages of rehabilitation.

With more and more children and adolescents becoming involved in intense exercise and competitive sports, it is extremely important to match the exercise intensity to the child’s age. Attention towards training and conditioning to optimise performance is vital.

While the bones are still growing exercise, exposing the athlete to a sudden increase in exercise intensity can damage the adolescent bone while it is still undergoing fusion. At the same time, training should encourage athletic development and be as consistent as possible to avoid sudden overload. A rapid increase in training intensity or volume tends to create an environment where injuries such as avulsion fractures may occur.