What is Ankylosing Spondylitis?

Ankylosing spondylitis is an inflammatory type of arthritis that affects the spinal joints & ligaments primarily. The inflammatory changes can erode the joint structures & result in a limitation of movement. This may progress up the spine to the neck region & give rise to a slouched posture. Characteristically, ankylosing spondylitis sufferers tend to be male & between the ages of 15-35; however, it has been suggested that the condition may develop over several years prior to diagnosis. 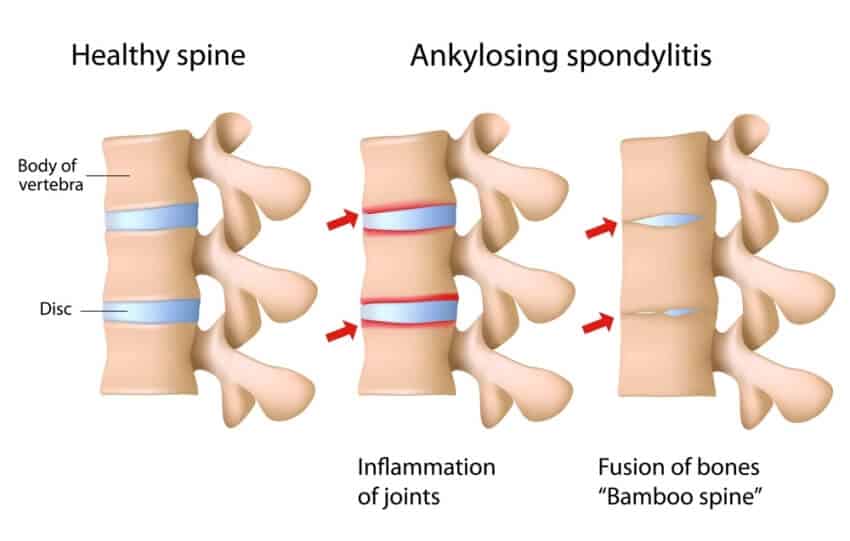 The presentation of ankylosing spondylitis can mimic other forms of back pain & therefore it can be difficult to diagnose at this stage. For this reason, it is not uncommon for a sufferer to have several visits to various practitioners prior to receiving an accurate diagnosis.

Onset may occur with pain or stiffness in the spine, most commonly around the pelvis. Often, the pattern of pain varies & this further complicates the diagnosis. The pain may move from side to side or radiate along the back of the thigh towards the knee. Usually, the patient will report morning stiffness that is eased with exercise. The pain is normally present on both sides of the spine. Buttock pain may present ache or stiffness after periods of inactivity.

As the condition progresses the bones of the spine can begin to fuse & movements such as touching the toes can prove challenging. Decreased chest expansion and anterior chest pain may be present due to involvement of the rib joints. Also, in up to 50% of cases, there will be involvement of the larger peripheral joints outside of the spine. Heel pain & muscle spasm may occur. Sciatica is often present on both sides or may alternate.

Who Is At Risk of Getting A.S.?

The age of onset of ankylosing spondylitis clinically is between 15 and 25 years of age, with an average of 26-27 years. The male to female ration has shown wide variations from 4 to 15:1. An earlier onset generally gives rise to a worse prognosis.
Pain tends to be at its maximum in the morning, evening, and at night. Periods of remission may occur where no symptoms are experienced. The condition will generally progress most rapidly over the first ten years after onset.

In those over 25 years of age the condition may present as flares every 5 years. The condition may spread up the spine slowly and the thoracic spine may not be affected until the patient is into their forties or fifties. An increased mortality rate is expected in patients diagnosed with ankylosing spondylitis.

How do I know if I have Ankylosing Spondylitis?

Blood tests assessing for the blood antigen HLA-B27 is found in up to 90% of patients with ankylosing spondylitis. ESR (Erythrocyte Sedimentation Rate) will normally be elevated, depending on disease activity. The condition is negative for rheumatoid factor

X-ray’s may show the characteristic changes of ankylosing spondylitis, which include inflammation of the sacroiliac joints & fusion of the spinal joints.

Prior to commencing a treatment programme a detailed assessment of the degree of progression of the condition and potential areas of muscle weakness or imbalance that may develop due to the condition. Gentle joint mobilisation & soft tissue release techniques are commonly used to provide relief & to maximise range of motion of the back.

Application of a strengthening programme is important with ankylosing spondylitis in order to minimise the impact of the condition on posture and to maintain ribcage motion to allow optimal breathing and daily function.

For further information on treatment of back pain go to: