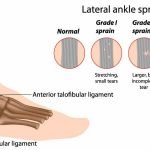 What is an Ankle Sprain?

Ankle sprains are very common and most occur during sports such as soccer that involve a lot of turning. Occasionally, we see individuals after a fall or accident taking place at home or work.  The most common type of ankle injury is an ankle sprain. A sprain of the ankle occurs when the ligaments on the inside or outside of the ankle are stretched beyond their normal range.

Symptoms of an Ankle Sprain

An ankle sprain can vary significantly in terms of symptom severity. Generally, the ankle will swell & become painful to touch. It will be impossible to continue playing sport & difficult to walk on the ankle in many cases. Extreme ankle pain may indicate a potential fracture in the area.

Commonly ankle injuries occur from planting the foot on an uneven surface causing a distraction force to the lateral part of the ankle. An associated click or popping sound at the ankle may be reported. Like most injuries, an ankle sprain can be complicated by other ankle injuries, which can be easily missed. It is our experience that injuries to other structures and ligaments around the ankle can often give rise to ongoing issues for some athletes if inadequately rehabilitated.

A poorly rehabilitated ankle sprain can give rise to future sports injury down the line and is something that is commonly encountered in athletes with knee or hip pain and even low back pain. The ankle is a particularly sensitive structure. This is due to the fact that the entire body weight is transferred through the ankle with each step.

Treatment of an Ankle Sprain

Should I Ice My Ankle?

Traditionally, the recommended acute treatment of an ankle sprain would apply the R.I.C.E protocol, that is Rest, Ice, Compression & Elevation. This perceived wisdom has been debated in more recent research. Indeed, the wisdom of blocking the bodies natural response to injury would seem counter-intuitive.

When the evidence base for ice application is reviewed, it is shown to be far from overwhelming. Dr. Mirkin, the man responsible for developing the R.I.C.E. (Rest, Ice, Compression & Elevation) protocol has since altered his opinion and stated that the protocol is unlikely to be best practice in dealing with an injury.

How Early Should I Exercise After an Ankle Sprain?

Early movement and exercise is now recommended and the rest period should be kept to a minimum. After a brief period of rest, the athlete should commence controlled movement of the injured ankle and, only in severe cases, should crutches be used. Many athletes can commence controlled exercise of the joint within 48 hours. The initial goal is to decrease pain & swelling so that the athlete can progress on to weight-bearing exercise as soon as possible.

Sports people that rush back to sport after this injury are at much greater risk of re-injury and thus put themselves at risk of a prolonged period out of their chosen sport. It is not simply a case of getting the swelling down and resting the injury. A graded exercise rehabilitation programme is vital to optimise recovery from the ankle sprain and to prevent recurrence. Poor initial rehabilitation can create an environment where repeated injury may occur and it becomes an ongoing pattern of re-injury.

We have clinical expertise in managing ankle sprains to help you return to sport or activity as soon as possible. We will provide tailored treatment to address areas of injury & weakness that may have occurred secondary to injury in order to prevent recurrence once you return to activity.