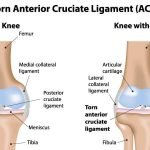 What is an ACL Injury?

Oftentimes, the anterior cruciate ligament can be injured along with the meniscus (cartilage) of the knee. The ‘terrible triad’ as it is known involves an injury incorporating the anterior cruciate ligament, the medial meniscus and the medial collateral ligament on the inside of the knee This is a severe injury and requires a more complex and prolonged rehabilitation than an isolated ligament injury.

The anterior cruciate ligament (ACL) is more commonly injured during collision or field sports. An ACL injury generally occurs from a twisting movement such as changing direction rapidly during a match while the foot is planted on the ground. It also occurs when landing from a jump. Female athletes have been shown to have a higher incidence of anterior cruciate injury than males due to biomechanical and muscle strength characteristics.

70% of ACL injuries are non-contact-related and can take place at all levels of sport. Female athletes are 2 to 8 times more likely to suffer from a serious knee injury or ACL tear than male athletes. Much of this is down to variations in anatomy, hormonal and strength discrepancies. If the knee hyperextended, then an injury of the posterior cruciate ligament would also be considered

The Cincinnati Sports Medicine Research Foundation (1999) reported that untrained female athletes had a 3.6 times higher rate of serious knee injury when monitored over the course of a season.

Diagnosis of an ACL Injury

An ACL injury may be suspected based on the nature of the injury. The team physiotherapist may recommend an immediate transfer to A & E for imaging of the injured knee. Often, the athlete will report a twisting motion with an associated click and a possible giving way of the knee joint. There may be immediate pain and swelling due to haemarthrosis, which means the knee joint filling with blood.

Not all ACL tears induce severe pain or swelling & some may require further examination using orthopaedic testing or an MRI scan to further investigate the potential structures involved. An x-ray is not effective in diagnosing an anterior cruciate tear.

A RAMP lesion is an injury to the capsule that surround the knee. This can occur alongside an ACL tear and it is very important that this is not missed prior to surgery or this can lead to ongoing knee pain. As part of a RAMP injury the ligament that attaches the knee cartilage to the shin bone (meniscotibial ligament) can be disrupted. A history of severe knee rotation at the time of injury alongside significant tenderness to the back of the knee medially suggests the presence of a RAMP lesion. If this is not repaired alongside the cruciate then emerging evidence suggests that this can be a source of ongoing rotational instability. Research suggests about 20% of ACL injuries will co-exist with a RAMP lesion and this lesion will be missed unless it is visualised during surgery.

Most people presume that surgery is the only viable option for an anterior cruciate injury. For those that are not involved in high level sport then there is research to suggest that a non-surgical approach is a viable option and that such individuals can return to a good level of function if they adhere to their rehabilitation programme. The primary issue with cruciate injuries is dealing with athletes that are overly eager to return to sport sooner than advised. Although there are cases of professional athletes returning to sport in shorter than normal time frames after injury, the average time to return, even in professional sports stars is generally much longer than this. Careful adherence to the ACL rehabilitation protocol in order to achieve specific goals is vitally important if full recovery from anterior cruciate ligament injury is to be achieved.

Rehabilitation of an anterior cruciate ligament requires a comprehensive strengthening, proprioception & agility programme. Early stage rehab requires a restoration of full range of motion as soon as possible. The emphasis will then progress towards improving strength of the quadriceps and hamstrings & surrounding musculature. A rushed return to sport without completion of physiotherapist guided return-to-sport protocol can put the athlete at increased risk of re-injury.

Surgery for an ACL Injury

Not all ACL tears require surgery; however, in younger athletes with significant instabiity then this approach would be advisable. The necessity for surgery will be dictated by factors such as knee joint laxity, age & whether there is a plan to return to competitive sport.

Some people, understandably, prefer to attend physiotherapy in the first instance, and try to avoid surgery. If these patients subsequently experience episodes of instability or other symptoms they can still undergo ACL surgery at a later date.

People who do not have surgery to stabilise their knees are known to be at increased risk of re-injuring the knee, particularly medial collateral ligament sprains and cartilage damage. There is, however, no evidence that they are at a higher risk of developing osteoarthritis compared to those who have surgery.

Even if returning to sport is not an issue for a patient there are still two groups of patients who should almost always have their ACL reconstructed. If a patient has ruptured their medial collateral ligament (MCL) at the same time as their ACL, the ACL should be repaired (but not the MCL). Secondly, there are a small number of people who have sustained a large cartilage tear at the same time as their ACL injury. If it is possible to repair the cartilage rather than remove it, it is important to reconstruct the ACL as soon as possible to ensure the cartilage repair heals.

Should I do Rehab Before Surgery?

Maximising knee range of motion and function pre-surgery is a key component in predicting post-surgical outcomes. In most cases, surgery following an ACL tear often takes place a month after injury. This allows  swelling to decrease and provides a window for the physiotherapist to increase muscle strength & lower limb control. If the patient does not undergo physiotherapy rehabilitation then significant muscle atrophy, range of motion deficits and compensatory movement patterns can develop. Physiotherapists will help to identify these deficits in order to prevent issues during & after surgery. Compliance with your physiotherapy programme is vital as incidence of re-injury & ACL tear of the opposite side knee are very common in athletes.

How to prevent an ACL Injury

There is significant research supporting the use of specific physiotherapy protocols in the prevention of anterior cruciate ligament injuries. The literature suggests that neuromuscular training programmes for athletes can have an enormous impact in terms of reducing ACL injury rates. For expert assessment & advice, please contact your physiotherapist

Should I Wear a Knee Brace after my Knee Injury?

Many patients who have had ACL injuries like to use a knee brace as it provides a sense of security when playing sport. While use of a brace may be comforting, the primary determinant of success after cruciate injury will be the quality of the rehabilitation programme performed. The knee, if rehabilitated appropriately, should be able to withstand regular activities without the use of an artificial external support.